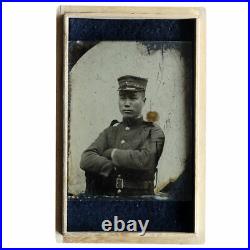 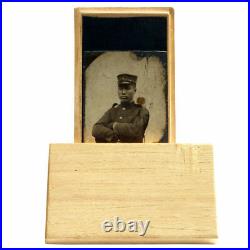 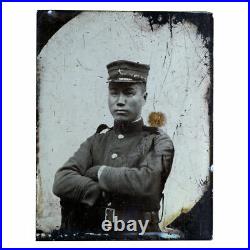 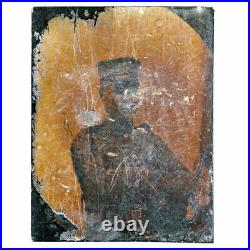 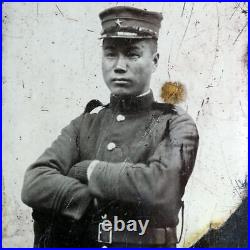 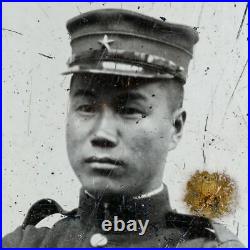 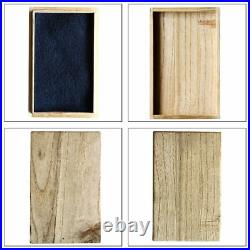 Circa 1880’s-1890’s Japanese Soldier Ambrotype in kiri wood case. Provenance: From the beautiful ambrotype collection of Jeremy Rasse, Pelissanne, France. When Japan opened its ports to the West in the 1850s, photography-called “shashin”, literally, “a copy of truth”, soon became widely available. High-end professional salons and open-air studios operated by itinerant practitioners offered portraits at every price range. While the popularity of ambrotypes, a positive photograph on glass, was short-lived in the United States, Japanese ambrotypes were in demand from the early 1870s until the end of the nineteenth century. Housed in poetry-inscribed kiri-wood boxes, they provide an intimate and rare glimpse of how modern Japanese society represented itself. James Ambrose Cutting patented the ambrotype process in 1854. Ambrotypes were most popular in the mid-1850s to mid-1860s. Cartes de visite and other paper print photographs, easily available in multiple copies, replaced them. An ambrotype is comprised of an underexposed glass negative placed against a dark background. The dark backing material creates a positive image. Photographers often applied pigments to the surface of the plate to add color, often tinting cheeks and lips red and adding gold highlights to jewelry, buttons, and belt buckles. The collodion positive, or ambrotype, first appeared in about 1853. By the 1860s the process had largely disappeared from high street studios, but it remained popular with itinerant open-air photographers until the 1880s, because portraits could be made in a few minutes while sitters waited. Kiri wood (case) is native to Japan and is akin to balsa wood (except stronger). Proper name is “Paulownia” and is known in Japan as kiri. Tomentosa; it is also known as the “Princess tree” or the “Phoenix tree”. Paulownia is the mon of the office of the Japanese prime minister, and also serves as the Government Seal of Japan used by the Cabinet and the Government of Japan (whereas the chrysanthemum is the Imperial Seal of Japan). This item is in the category “Collectibles\Photographic Images\Photographs”. The seller is “mgphoto2012″ and is located in this country: US. This item can be shipped worldwide.